Cooking With an Induction Cooktop

Until recently I always figured that induction cooking was only for "the serious cook." After using the Avant-Garde Induction Cooktop I now firmly believe that anyone cooking on this will take cooking as seriously fun.

The cooktop I used is model CC-040, marketed by Chic Chefs of Willis, Texas. (You can find the cooktop at their website: http://chicchefsinc.com.) Out of the box the unit looks a bit like an office scale we've used for years. The base is rather nondescript, and the top is just a flat plastic surface. The unit is slightly larger than a traditional single-burner hotplate and will easily handle pots or pans with a diameter over 4.5 inches.

Using the unit was simple enough; I just plugged it into my wall outlet. I should say it was simple—after finding the right pan to use. If you don't use the right type of pan, the Avant-Garde Induction Cooktop displays an error code and refuses to do much of anything.

Why is the pan important? Induction cooking involves the use of magnets that enable heat to be transferred directly to the pot or pan. In traditional cooking lots of heat is "wasted" by heating elements, stove tops, and by heat escaping around the cooking vessel. Not so with induction cooking, as the heat is generated by magnetic induction directly to the vessel.

Since the cooking is accomplished through magnets, it makes sense that the pot or pan must be magnetic. Finding a suitable pan was harder than I thought. I believed that any old steel cookware would do the job, but I was wrong. I found out that not all steel is magnetic. What about aluminum cookware? Forget about it! Finally I went to a local cookware store, armed with a kitchen magnet, and located just the pots and pans I needed. (If the magnet will stick to the bottom of the pot or pan, you can use it for induction cooking.)

Armed with the proper pots and pans I went to work cooking various items. All I can say is that the Avant-Garde Induction Cooktop is amazing! I felt like I was working with magic. The boiling time was literally half the time required for a regular electric stove top. Not believing that this was really true I performed a non-scientific test. I started to boil water on both the Avant-Garde Induction Cooktop as well as my electric range at the same time. The soup on the induction cooktop was ready to serve by the time that the water on the stove had just started to boil.

After I finished making my soup I couldn't help but notice that not only was the cooktop cool, but my kitchen remained at the same cool temperature. (Well, except for around the electric range where I was still trying to boil the soup water.) This is due to the fact that the heat reacts only with the cooking pan or pot. No more standing over a hot stove for me!

I was still having a hard time believing that the cooktop could stay cool where the pan wasn't cooking, even though the surface was cool to my touch. So, I opened the freezer, grabbed an ice cube, and placed it on the cooktop. The ice cube didn't melt; color me impressed!

A great safety feature is that after the pot or pan is removed from the cooktop, paper or any other items will not burn if they are accidently placed on the cooktop. Similar to cooking with gas, the heat adjustment of the Avant-Garde Induction Cooktop was instantaneous. As soon as I readjusted the heat level the soup stopped boiling. (The unit allows selection among 10 heat levels or the setting of a specific temperature—very nice.) The power range goes from 400W to 1800W.

Another great feature is the easy clean up. Clean up is fast and easy because spills do not burn on the cooktop. (They may burn in the pot if the temperature setting is too high, but not on the cooktop itself.) When using the cooktop on another day I made some sloppy joes. I spilled tomato sauce onto the cooktop as I was cooking. Still being a bit skeptical I chose to wait until I was finished cooking before cleaning up the mess. Thinking that I was going to have a big mess to clean up—like I was used to on regular stoves—I was pleasantly surprised that all I had to do was get a damp cloth and wipe up the spill.

There is very little that I didn't like about the Chic Chefs Avant-Garde Induction Cooktop. I did find the instructions provided with the unit to be somewhat lacking, but to be honest there really isn't a lot of instruction needed.

Some may think that the price of this particular induction cooktop is a bit pricey, but after doing some comparisons it is less expensive than a lot of the other ones around.

In a world where most people are trying to go eco-friendly, this is one way to go. The induction cooktop is very energy efficient. It would make a great addition to any cook's kitchen.

Doris is a jack of all trades, writing on a variety of topics. Her articles have helped enlighten and entertain thousands over the years. Learn more about Doris...

It's always a possibility that your pet will come home one day smelling just disgusting, and the cause of that smell ...

If you're in a crunch for what to make for dinner, try making some breadsticks. They are delicious and will satisfy any ...

Initially bred for fighting, the Bulldog is now a sought after pet. He is docile and affectionate by nature.

The leading cause of most home fires is grease spatter and buildup in the kitchen. With a little forethought and care, ...

Remodeling your kitchen is a huge project, and one that should never be undertaken without some serious consideration. Do ...

Things can pile up in your home and cause clutter. Use shelves to help organize items and create a neat appearance.

Re "Sorry, but your method only works if the two cells are vertically adjacent."

In playing around with referencing cells within a selection, I noticed that how you select the cells makes a difference, even if the two cells are contiguous.

This is important as the sign of the difference could be affected by how you select the two cells.

@Phil W
Sorry, but your method only works if the two cells are vertically adjacent. Here is another way to display a signed difference. This method applies to all sheets in the workbook, so the three event procedures must be located in the code window of the ThisWorkbook document module.

(see Figure 1 below) is a screen shot of the code window. 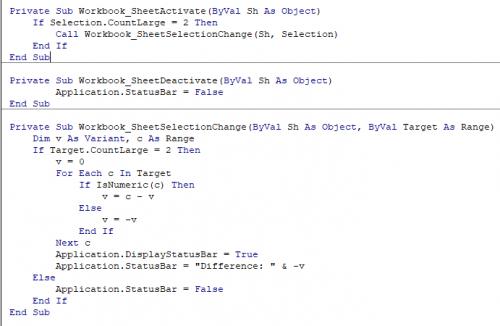 If you want to display a signed difference between two values, and assuming you are always subtracting the second value in the selected range from the first one, here is a variation on the macro. This would more closely match the formula mentioned in Allen's comments.